The last few weeks we have seen an increase of bowel obstructions in animals at the clinic. A bowel obstruction is a blockage that prevents foods or liquids from passing into the small and large intestines. A blockage can be partial or total. There are several causes of blockages such as a fecal impaction, diseases like cancer or a foreign body. Vomiting, the inability to have a bowel movement, loose stools are a few symptoms that may be present. Animals may also not want to eat or drink which can cause dehydration, weight lose and lack of energy. There are ways to prevent blockages from foreign bodies by keeping animals out of the trash, clean up children’s toys from the floor, making sure animal toys are the appropriate size so they can not be swallowed. In order to diagnose a bowel obstruction the doctor preforms a physical exam, radiographs may be taken to see if anything can be seen and lab work my also be done. Most cases require surgery to remove the foreign body that is causing the blockage. 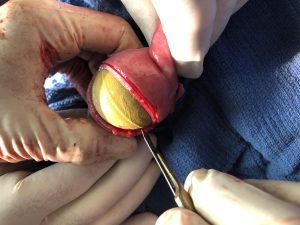 We will do our best to accommodate your busy schedule. Call us to request an appointment today!